Shaun Tan grew up in the northern suburbs of Perth, Western Australia, and currently works as an artist, author and film-maker in Melbourne. Books such as The Rabbits, The Red Tree, Tales From Outer Suburbia and the acclaimed wordless novel The Arrival have been widely translated and enjoyed by readers of all ages. Shaun has also worked as a theatre designer, feature film concept artist, and wrote and directed the Academy Award winning animated short The Lost Thing. In 2011 he received the prestigious Astrid Lindgren Memorial Award in Sweden for his body of work. His most recent publication is The Bird King.

Shaun prefaces by saying that ultimately the truth of what he wants to say is in his actual work.

He shares flashes of insight...


we work in little bubbles, bumping into each other


he's interested in migration, crossing borders, transitions, the idea of a strange encounter, like in his amazing book, "The Arrival"

we forget our everyday world is really exotic, we see it so much we're sort of blind to it - the dark side of familiarity, where we stop appreciating the ordinary.


He reads us one of his stories, "Eric" (from "Tales From Outer Suburbia") 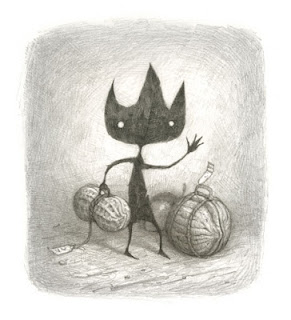 The room is captivated, and there's a huge AWWW... at the end.

Now he's discussing the themes of the story and how he followed the thread, saying


He's talking (and showing slides) of other artists who captured seemingly unimportant things and found the beauty (and stories) in them, photos of his own studio that reveal much about his process, and images of close-to-his-home domestic scenes that inspire him.  (We're seeing paintings and drawings, and even his sketchbooks!)

He's speaking now of exploring otherness and showing sketches he's done from museums of things foreign to him, saying:

"Drawing is the process of figuring out why I like things."


The most delicious part of his talk are his captioned illustrations that crack us up, explaining a 'typical' day.  One drawing reads "stumble across my own consciousness in the kitchen - what time is it?"

There's so much more, and this moment still resonates from Shaun's keynote: 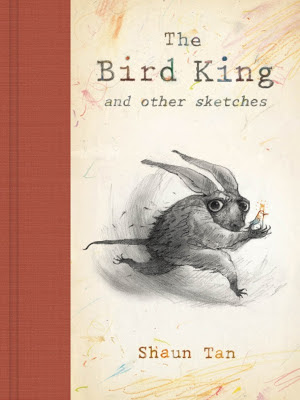 Want to hear more of Shaun's remarkable thoughts? You can check out our pre-conference interview, and his great website, and see some of his sketches yourself in his new "The Bird King and other sketches" but it was a delight to be able to hear him in person.


We're even getting a preview of his current work in progress...And we end with a standing ovation!