Our usual gala festivities may be online this year due to quarantine. But that did not stop the book world from shining bright online! The good-natured jokes were plentiful last night.

Illustrator Debbi Ohi led us into the fun with a "sketchy" joke about what she planned to wear to the virtual Golden Kites versus what she had on at the moment.

While pandemic exhaustion certainly has many of us relating to unbrushed hair and missed shower appointments, tweeters couldn't help joining in on the joke, tweeting out promises that they too,  were were sitting behind their computers dressed in elegant attire reminiscent of Rihanna at the Met Gala. 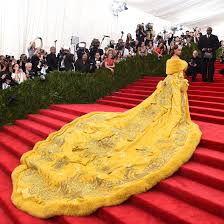 While there were no actual sightings of fur lined capes and trains, our most ambitious attendee's did show support by tweeting out plenty of glittering looks.
Artist, Iris Imaginoria, gave us a shimmering selfie wearing a lace trimmed outfit. She completed her stunning look with golden teardrop earrings and daring golden eye makeup.

The Golden Kite Gala may not be in person, but I never pass up an opportunity to dress up! #Goldenkiteoutfit #NY21SCBWI pic.twitter.com/LF8tXKMYfA

Writer/Illustrator Erin Rew threw yoga pants to the wind, opting for a more festive look, slipping into a pre-pandemic golden gown. Even the cat behind her is clamoring for a closer look.

Finally had a reason to wear my fancy gold dress... let’s just pretend it zipped up in back.

Anyone else dress-up for the Golden Kite Awards gala or just me? #NY21SCBWI #SCBWIBIRD pic.twitter.com/rkYrJwWfht

Illustrator Alicia Schwab gave a wink to the Perseverance rover landing on Mars this week with her show stopping intergalactic golden look.

I’m either dressed up for the Mars landing or a children’s book conference #ny21scbwi Golden Kite Gala pic.twitter.com/Hz26oJzFz9

These, and many other glittering tweets led us straight to the nearest Zoom link to attend the first ever virtual Golden Kite Awards. Here are my top three golden moments during the awards segment.

3.  Jennifer Garner, dressed in an on-theme amber colored cardigan, confessing that she can barely get through Charlotte's Web without tearing up (neither can we, Jen!)

We loved having the lovely Jennifer Garner open the SCBWI Golden Kite Awards. She does so much to support good children's books. #NY21SCBWI https://t.co/OMJQCY9Oqs

2.  Renee' Watson, whose novel WAYS TO MAKE SUNSHINE, shines golden bright, sharing with us that the main character Ryan is based on her god daughter, Ryan.

So honored that #WaysToMakeSunshine received the SCBWI Golden Kite Award for Middle Grade/Young Readers Fiction. Thank you to the committee. And thank you to my Goddaughter, the real Ryan Hart, for inspiring this series...you are my sunshine. @scbwi pic.twitter.com/aU3SdL8f6z

1.  Lin Oliver's introduction, where she placed a bouquet of golden roses in her Zoom background in honor of our beloved Texans who have been hit pretty hard by a devastating snow storm, this week.