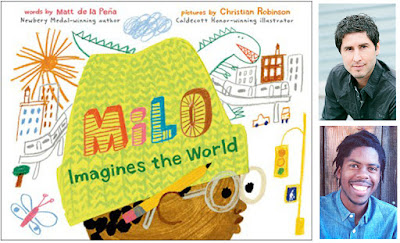 Buy MILO in the SCBWI Bookshop

Matt de la Peña is the New York Times bestselling, Newbery Medal winning author of seven young adult novels (including Mexican WhiteBoy, We Were Here and Superman: Dawnbreaker) and five picture books (including Last Stop on Market Street and Love). Matt received his MFA in creative writing from San Diego State University and his BA from the University of the Pacific, where he attended school on a full athletic scholarship for basketball. Matt teaches creative writing and visits schools and colleges throughout the country. You can visit Matt at mattdelapena.com, on Twitter @mattdelapena, or on Instagram @mattdelapena. 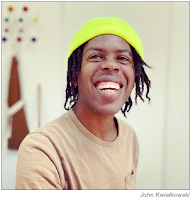 Christian Robinson was born in Hollywood, California. He grew up in a small one-bedroom apartment with his brother, two cousins, aunt, and grandmother.  He studied animation at the California Institute of the Arts and would later work with the Sesame Workshop and Pixar Animation Studios before becoming an illustrator and author of books for children. He is the author and illustrator of Another and the New York Times bestseller, You Matter. He is the illustrator of Gaston, written by Kelly DiPucchio, and the #1 New York Times bestseller Last Stop on Market Street, written by Matt de la Peña, which was awarded a Caldecott Honor, a Coretta Scott King Illustrator Honor, and the Newbery Medal. Visit him online at TheArtofFun.com and on Instagram @theartoffun.

You may think you're boring, but Matt says that every person has a fascinating story. You just need to find a way to share it in an interesting way. 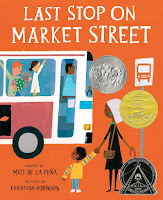 Matt talked about the importance of illustrations in his picture books. "Sometimes I don't know what my book's about until it's illustrated."

He says that writing is all about revision, and revision is like solving a puzzle. The final result may not be the one correct solution - you need to find the solution that is right for you.

One final piece of writing advice fro Matt: Do not write what you see. Write about what will be seen.

Christian says he's an anxious person, spends a lot of time in his own head. From childhood, Christian found that drawing became a way to make space for himself and to create the kind of world he wanted to see. 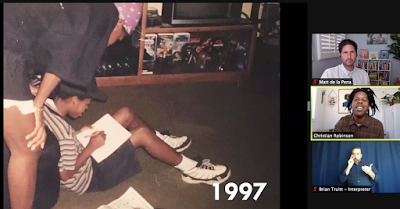 Once he receives a new picture book manuscript and has pored over it, Christian says he always starts small first, using post-it notes so he's not distracted by details. 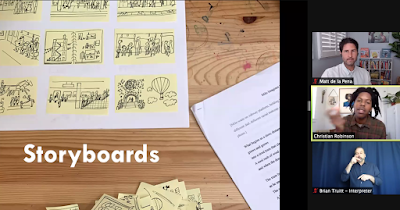 Christian talked about his journey to picture books, his work in animation and Pixar, plus other types of employment. Through it all, he kept creating. He encourages artists to create for themselves but also to share with others. "Share stuff," says Christian. "You never know who's watching."

Another tip from Christian: Know your strengths. These are things that come to you naturally, without anyone telling you to do something, things you are excited about. Christian says that for him, it's simplicity in art, as well as design. "For you, it might be something else." 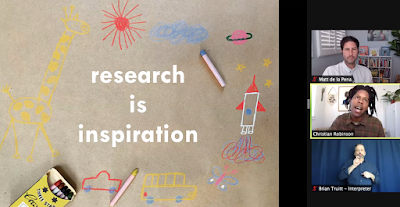 Even if you're assigned a project you may not be excited about, find something in the research that does excite you. Christian confesses that at first he was hesitant about drawing buses in Last Stop but then got inspired as he began researching and surrounding himself with images and ideas.

Another tip: play well with others. Christian gave an example of how Simon & Schuster editor Justin Chanda helped Christian discover what he really wanted his story to be about. Christian says that making a picture book is a team effort, so it's important to learn how to work with others on your team, including your art director. 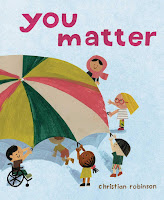 On the collaborative process:

Matt says that in a good collaboration, each person gives the other a lot of freedom. Matt says he does what he can to help support the illustrator....and that includes trusting the artist, giving them a lot of room.

Christian says he appreciates the freedom, and says that it's also important to leave space for the reader.

Sometimes the reader is smarter than the book creator, adds Matt. He loves it when a young reader will tell him what the book is really about.

Matt: "Be daring. Don't try to fit into what's there. Don't write to the market. Follow your energy."

Christian: "The more specific you are with your artistry, the more universal it becomes. Don't forget to be vulnerable and honest."

You can buy Milo Imagines The World by Matt de la Pena and Christian Robinson in the SCBWI bookshop (via Bookshop.org)

Posted by Debbie Ridpath Ohi at 9:51 AM