Eduardo Díaz is the director of the Smithsonian Latino Center and a 30-year veteran of arts administration. He is responsible for the management and delivery of exhibitions, public and educational programs, and the Latino Center’s Latino Virtual Museum. During his tenure, Eduardo has spearheaded several projects, including the exhibitions “Our America: The Latino Presence in American Art” and “Cerámica de los Ancestros: Central America’s Past Revealed.” Current research initiatives include the Caribbean Indigenous Legacies Project and the Latino D.C. History Project.

Eduardo introduces the Smithsonian Latino Center, their gallery opening in Spring 2021, and a new series of six books.

He discusses the shifting demographics of the US, where Latinos comprise 18% of the population, but 25% of the K-12 population. And references the ongoing lack of diversity in children's publishing, and the importance of the Latino community having the opportunity to tell their stories.

"Working with first voice authors and illustrators is critically important."

As an example, Eduardo discusses a fiction picture book featuring a Latina character, and reflects on the missed opportunities to include more stories of Latino history, like Jovita Idar, a publisher who ran a Spanish language newspaper on border of Texas and Mexico and stood up to a hate group. As Eduardo says,

"She's a hero in our community, but her story is virtually unknown." 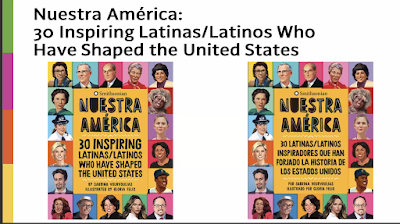 The first title from the Smithsonian Latino Center is "Nuestra América," featuring "30 Inspiring Latinas/Latinos Who Have Shaped The United States"