Emily Feinberg is an editor at Roaring Brook Press, an imprint of Macmillan Publishers. After graduating with an M.A. in Children’s Literature from Simmons University, Emily joined the editorial team at Roaring Brook where she’s worked for over eight years. Books she’s edited include Caldecott Honor winner Big Cat, Little Cat by Elisha Cooper, the If Sharks Disappeared series by Lily WIlliams, Hawk Rising by Maria Gianferrari (illustrated by Brian Floca), and Jane Against the World: Roe V. Wade and the Fight for Reproductive Rights by Karen Blumenthal.

Using three examples of books she has edited, Emily speaks about voice, research and narrative, and how to build a narrative from a broader topic.

As a read aloud, Emily shares "Red Rover: Curiosity on Mars," by Richard Ho, illustrated by Katherine Roy, speaking to the voice and the back matter choices, and to the illustrations, how they're not just accurate, how they capture the tone of the book as well.

She next speaks about "Just Right: Searching for the Goldilocks Planet," by Curtis Manley, illustrated by Jessica Lanan, showing us the end papers, and their intent to give "a vaster overview."

The opening spread grounds us with a silent visual narrative of a young girl looking up at the stars and visiting a science museum exhibit of exoplanets to help the child reader connect with the text. (The young girl isn't mentioned in the text at all - it's all carried by the illustrations.) 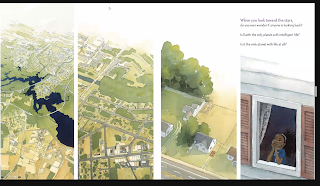 The book conveys "wonder and curiosity," key elements of science.

And then Emily discusses Jane Against the World, talking about how the book tackled the scope of the history of women's reproductive rights. 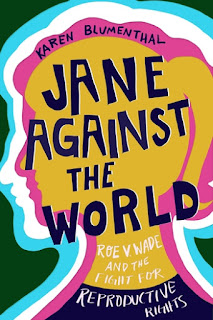 The author, the late Karen Blumenthal, was able to interview Norma McCorvey (a.k.a. the plaintiff Jane Roe from Roe v. Wade) and the lawyer who represented her. Emily speaks of how they worked to ground the story in people rather than events.

Final thought of the keynote:

The most important thing, according to Emily, is to "tell a good story."