Jarrett was first published at the age of twenty-three, and now has 39 published books to his credit. (40 in one month!) His titles include several picture books, his wildly popular Lunch Lady graphic novels, the Platypus Police Squad middle grade novels, and the latest Star Wars™: Jedi Academy books. Jarrett shares his own story of growing up among family addiction in his young adult graphic memoir, Hey, Kiddo, (National Book Award Finalist). He is a two-time winner of the Children’s Choice Book Awards in the Third-to-Fourth-Grade-Book-of-the-Year category, and has been a finalist for the prestigious Will Eisner Comic Industry Award. 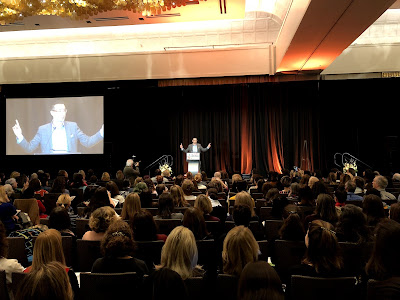 Jarrett opens with sharing about his childhood, what he read, and even his very first book, that he wrote in third grade! A story that was told in words and pictures, "exactly what I do today."

"The words and pictures both tell the story."

He tells us about his two years of rejections, for his writing, for his illustrations,

"I just kept writing, because that's what I loved to do."

His first break , an editor responded to a post card, and he got a contract for his first published book, Good Night, Monkey Boy.

"What a privilege I have to be welcomed into the imaginations of young people. And what a responsibility I have..."

Jarrett explains about his last-minute TEDx talk, and how it went viral (viewed over a million times), mostly due to his honesty in the first moments about his mother's heroine addiction — how it resonated for so many young people he met touring for his other books.

There's so much more about the process, and Jarrett also reads us a few pages of "Hey, Kiddo", with video of the interior pages and images from the book, because, once again,

"The words and pictures both tell the story." 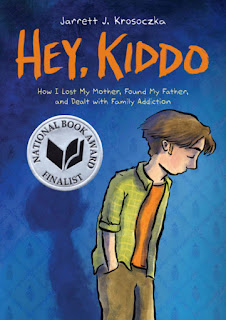 It's an amazing, inspiring opening keynote, and ends with a standing ovation!

You can find out more about Jarrett at http://www.studiojjk.com/
Posted by Lee Wind, M.Ed. at 6:45 AM