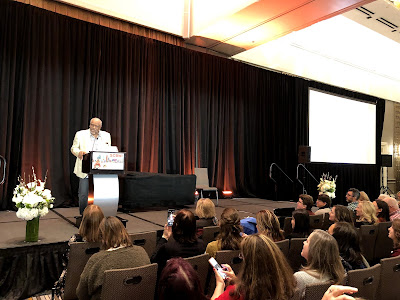 Christopher Paul Curtis is the author of nine books for young people (written by him with the intent that they are for all ages), including Bud, Not Buddy; The Mighty Miss Malone; Elijah of Buxton; The Watsons Go To Birmingham—1963; and Mr. Chickee’s Funny Money. In addition to being translated into twelve languages and selling more than seven million copies, his work has been performed as an off-Broadway musical with a score written by Motown legend Lamont Dozier, a motion picture directed by Tony award-winning director Kenny Leon, and a world premier commission presented at the Kennedy Center in Washington, DC with music written by Terrence Blanchard. In 2000, Curtis became the first African American male to be awarded the prestigious Newbery medal. His most recent book, The Journey of Little Charlie, was named a 2018 National Book Award finalist.

Christopher opens with a tongue-in-cheek example of what not to do, and then tells us about his background in theater, different jobs he's had, and how he finished his college degree—the stories keeping us laughing.

How you build a book: "One brick at a time, you bring a lot of experiences to it."

His advice to young writers, which he shares with us:

1. Write every day. Writing is like everything else: The more you do it, the better you get at it.

3. You have to be patient. It takes time to write a good novel.

4. You can ignore all the rules. Once you know how to write, write your own way.


We hear funny and emotional stories from Christopher's life that transmuted into his novels (some of which stopped on cliffhangers—that we can only learn the ending of if we read the book!), themes he's explored in his books, the powerful moment that made him a writer, and so much more!

"Writing is an act of revelation" on the part of an author.


The keynote ends with a standing ovation!

Learn more about Christopher here: https://www.nobodybutcurtis.com/books
Posted by Lee Wind, M.Ed. at 10:34 AM